"In my case, MS was not my primary diagnosis, as it didn't rear its head until I was in my 30's. At the age of 12, I received the polio booster and I contracted polio from that small dose on a simple sugar cube.

After a few weeks or months, I began to have horrific leg cramps during the night. An Orthopedic Physician who was right out of college and a rising star in this profession for our town diagnosed it as a "delayed birth defect" and cut my Achilles tendon. The right leg was never the same. It was 3/4" shorter than my left leg and the muscles were greatly atrophied.

Overall, life was good for me. Successful in life, at home and in sports, yeah, life was good! About age 32, I lost the central vision in my right eye. I was at as total loss. An Ophthalmologist gave me a course of prednisone and slowly the vision returned.

In 1992, I was beginning my middle age spread and wanted to slow that down. My local radio station started advertising an MS-150 bike tour to raise money and awareness about the disease. I used to ride a bike as a kid and the thought of training to ride 150 miles in two days seemed quite demanding. Count me in ... I was ready to prepare for the challenge.

After riding my bike a few days, my right leg began to go numb. I thought I had pinched a nerve since I was doing something with my legs hadn't attempted in years. The next morning as I awoke, I was quite honestly rattled to the core when I found my entire body, from my chest to my toes had gone numb!

After an MRI and a spinal tap, a local neurologist concluded that it was M.S. To help settle my questions and for a second opinion, he referred me to a Physician at a nearby university medical center which I readily accepted.

The Dr. at this hospital put the x-rays in the scanner and told me I had Neurofibromatosis, benign tumors that grow on the Central Nervous System I recall telling my wife as we left, "I don't have M.S., I just have tumors"!

The surgery required the removal of my inner ear, which had a long-term effect not only on my hearing loss but also on my balance. After I was somewhat recovered, sports, which had become a major part of my life, were no longer an option at the level I was accustomed to playing. So, I returned to riding my bicycle.

About six months after my last surgery, my body went numb, again, from my chest to my toes. This confirmed both the original M.S. diagnosis and Neurofibromatosis and the original polio. Three strikes and I should be out ... but, this is my life/game and I make the rules ... as much as my body allows!

Due to the extensive surgery to my right foot as a child, I ended up with a neuropathic foot ... much like a diabetic. However, with the reduced feeling in that foot, I ended up having a small wound that became infected, and I had to have two toes amputated. 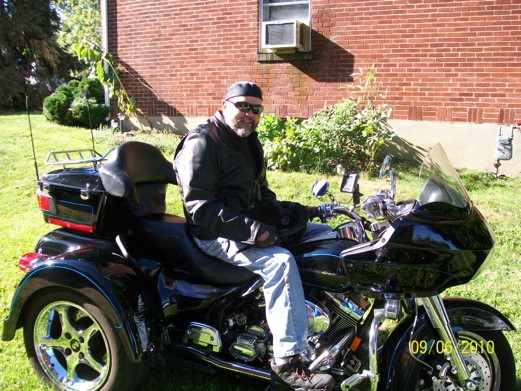 'PLEASE', you may be saying, 'does this story end now' ... and "not yet" is my response! Remember my right leg was left 3/4" shorter than my left leg? Well, after all these years of playing sports and riding my bike, the hip wore out on that side and had to be replaced. On July 18, 2005, I had the hip replaced. On October 5, 2005, the Dr. gave me permission to start riding again. Slowly at first but with dreams of returning to the roads I once traveled.

And it has paid off! Since that first ride, October, 2005, I have ridden almost 5,000 miles including the Mountains of Misery and this year's MS 150 Tour de Vine! By the way, over the years, I have ridden in about 40 different MS 150s, The State-side Tour of Champions and in 2003, the International Tour of Champions in Australia. My other adventures on a bicycle, all since my diagnosis of M.S., include riding from Maine to Florida in 1999, from Los Angeles, CA to Boston, MA in 2002 and a 12 day 850 mile tour of the New England States and into Canada in 2003. You see, life is still good.

From September 7, 2006 through October 6, 2006 Kenny rode over 2,060 miles from International Falls, MN to New Orleans, LA and raised over $5,000 for the cause. Once again he paid his own expenses and all monies donated went to the M.S. Society.

On March 17, 2006, I was hit by yet another curve ball. After experiencing a tightness in my chest I was found to have two arteries 90-95% blocked. Thankfully, with over 8,000 miles ridden in 2006, there was no damage to the heart and both arteries were successfully replaced.

Since that surgery, I have ridden almost 5,000 miles and am training for this years MS-150. I know how fortunate and blessed I am to be here, much less still riding my bike and dreaming the dream... to end the devastating effects of Multiple Sclerosis.

And after experiencing all of the above... This truly wonderful life experience continues to remind me that I'm just along for the ride!!! On December 03, 2012, back surgery was performed at Duke University Medical Center. A cyst was removed from L-3 and a spinal fusion was required. I am only spinning on a recumbant trainer now, but hope to be back on my bicycle, after my next appointment, February 3rd, 2013. Wish me luck with that!!!

I wish to thank all of my friends for their never ending support and encouragement.